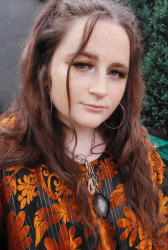 The Lion’s Gate Portal opens between July 26th and August 12th every year. It is at its peak on the 8th of August, so many spiritualists celebrate it on this day.

It is an incredibly spiritual time, with the energy of change and transformation. It is a great time to perform a Tarot spread, discovering how you can connect with its power to manifest and grow spiritually.

In this Lion’s Gate Tarot spread guide, I will walk you through an eight-card Lion’s Gate spread that looks at the different ways this spiritual event can help you on your own personal journey.

What is the Lion’s Gate?

So, what actually is the Lion’s Gate, and why is it so important?

The Lion’s Gate refers to when the star Sirius rises in the sky and thus aligns with the earth. Many mystics and spiritualists believe that this celestial event opens a portal of change and transformation.

It amplifies truth and clarity, allowing us to cross through this portal and understand other realms of existence.

The 8th of August is when Sirius is at its peak and therefore is when the portal is at its most powerful. As this celestial event happens in Leo season, it is known as the Lion’s Gate.

There is a numerological significance to this date, too. The number eight reflects abundance and infinity, revealing success and vision. It is also interesting to note that the number eight in Tarot is the Strength card. This card will often depict a Lion and represents inner power and compassion.

The opening of the Lion’s Gate Portal provides us with a spiritual moment to change and evolve into our true selves. By using Tarot, we can identify what the Lion’s Gate means to us.

As the power and symbolism of the number eight are prominent in the Lion’s Gate Portal, I have designed an eight-card spread to perform at this spiritual time.

The eight cards pulled in this spread refer to:

It can be difficult to get our heads around a larger Tarot spread at first. So, to help you understand the different positions and their spiritual meaning, I will walk through this spread with you. Let’s pick eight cards and go through them one by one.

What to Bring Forward Through the Portal

The first card pulled represents what you have now that you should bring through the portal. As the Lion’s Gate Portal is all about change and truth, we can use it to identify the good and bad in our current situation.

For this card, the querent pulled The Chariot. This is the seventh card of the Major Arcana and represents determination and strength. It is a sign of courage, suggesting that you have what it takes to overcome the obstacles in your path.

In this position, we can understand the Chariot is a sign for the querent to bring forward their strength and willpower to the next phase of their life.

They are determined and sure of themselves, having the inner power to overcome problems they face. The Tarot is telling the querent to stand strong and tall, pushing forward with their hopes and dreams.

What will be Amplified During the Portal’s Opening

The second card pulled in this spread reflects aspects of your life that will be amplified during the portal’s opening. These may seem unimportant to you. It may reveal passion and drive that you have been ignoring. However, the power of the Lion’s Gate will amplify these things.

For this card, the querent received Death. The eighteenth card of the Major Arcana, Death, is a highly misunderstood Tarot card. It does not represent physical death.

Rather, it signifies one chapter of your life coming to a close with a new one beginning. A card of hope and rebirth, Death is a monumental sign when appearing in a Tarot reading.

So, how can we understand Death in this position? Well, the querent is obviously going through some big changes in their life. However, these changes may be occurring slowly.

With the opening of the Lion’s Gate, this transition will be magnified. The old life of the querent will surely end when they have gone through the Lion’s Gate Portal, with a new one on the other side.

What to Leave Behind

The third card reveals things that are no longer serving you. It reflects aspects of your life that you must leave behind to truly harness the power of the Lion’s Gate.

As this position reflects things that you need to leave behind, it can be a bit confusing to receive such a positive card! However, when we receive a positive card in a position like this, we can look at its meaning differently. The Six of Wands is all about public praise and success.

So, perhaps it is telling the querent that they care too much about being seen in high regard. They may behave egotistically, with fame and status at the forefront of their mind. So, the Tarot is telling them they must leave this kind of attitude in their past to embrace the power of the Lion’s Gate.

What will I Find on the Other Side of the Portal

We are now moving on to the cards that reflect the future. The first three cards were all about where you are now, but the rest represent growth and knowledge that can be gained from the Lion’s Gate Portal.

The fourth card shows you what you will find on the other side of the portal. What has the Lion’s Gate illuminated for you?

For this card, the querent received The Star. This is a card all about hope and creativity. It will usually appear if you have been through a difficult time and are in need of a guiding star. It has an energy of inspiration and faith and is always a welcome card in a Tarot reading.

In this position, we can understand the Star to be telling the querent that the Lion’s Gate Portal will help them find hope and faith. As we can see from the previous cards, the querent is going through a time of change.

What will Benefit Me

The fifth card in the Lion’s Gate Tarot spread refers to how the portal will benefit you. It will reflect the new energy that the portal brings into your life.

For this card, the querent received the Eight of Pentacles. This card is all about diligence and hard work. It reflects a time of effort and persistence, with determination pushing you forward in your craft.

In this position, we can understand that the Lion’s Gate Portal will bring this energy to the querent. They will become more diligent at their work and become focused on mastering their skills.

What will Change Me

The sixth card pulled reflects changes that will occur during the opening of the Lion’s Gate Portal. As this spiritual event brings an energy of evolution and personal development, it will cause changes in your personal life.

For this card, the querent received the Ace of Swords. Because this card is an Ace, we already know that it has a whole load of energy of newness and change! I always see the Aces of each suit as their meaning at its purest.

The Suit of Swords represents intellect and truth. It asks us to use our brains when making decisions. The Ace of Swords thus represents clarity and mental breakthroughs. It reflects a time of realization and understanding, allowing you to see any problems you face through new eyes.

In this position, we can see that the opening of the Lion’s Gate Portal will bring clarity and truth to the querent. There will be a change in how they understand the world around them, bringing forth deep knowledge and wisdom.

The seventh card pulled in this Lion’s Gate Tarot spread reflects the enlightenment that the opening of the portal will bring. The opening of the Lion’s Gate Portal allows clarity and truth to be illuminated. Because of this, there will be areas in your life that you can understand better.

For this card, the querent received the King of Wands. This card represents leadership and vision. The King of Wands is a strong and passionate individual who is able to achieve goals and dreams. They are also great at helping others and guiding them toward the truth.

In this position, we can understand that the energy of the King of Wands will be illuminated as the Lion’s Gate opens. The querent will understand their goals and dreams more, working out what they need to do to achieve them.

The Lion’s Gate may also enlighten the querent to guide others around them. If they are in a position to help others on their path in life, they can do so with capability and understanding.

The eighth and final card in this Lion’s Gate Tarot spread reflects areas of manifestation. The opening of the Lion’s Gate Portal brings a whole load of spiritual energy and therefore is a great time to manifest goals and dreams.

The querent received the Wheel of Fortune in this position. This is the tenth card of the Major Arcana and one of the most symbolic cards in the deck.

The Wheel of Fortune is deeply spiritual, reflecting trust and faith in the universe. It reminds us that everything happens for a reason, and there are forces that are affecting us that we will never be able to truly understand.

So, how can we understand the Wheel of Fortune in this position? What is it telling the querent to work on manifesting?

Well, I believe this card serves the querent as a reminder of the powers of the universe when it comes to manifesting. We know that the querent is a strong-willed individual going through a huge change in their life. However, are they working with the universe to move forward on their path in life?

The Wheel of Fortune is incredibly spiritual, reminding us of the powers of nature and the universe. In order to grow and change, we must work with these powers.

Let’s look at some questions you might have about the Lion’s Gate Tarot spread.

Question: When Does the Lion’s Gate Portal Open?

Answer: The Lion’s Gate Portal opens between July 26th and August 12th every year, but it is most potent on the 8th of August.

Question: What is the Lion’s Gate Portal?

Answer: The Lion’s Gate Portal is when Sirius is aligned with the earth. It brings clarity and understanding, illuminating the truth in your life. It is also a great time to manifest and change, leaving the old you in the past.

Question: Does the Lion’s Gate Portal Open Every Year?

Answer: Yes, it opens every year and therefore is a brilliant annual event to refresh, change, and grow.

Question: Is the Lion’s Gate Tarot Spread Suitable for Beginners?

Answer: Yes. Of course, more complex spreads can be a bit daunting for beginners. However, I have designed this spread and guide to be accessible to everyone, regardless of your Tarot reading experience.

Answer: The Lion’s Gate Portal opening is an incredibly spiritual time with the energy of truth, change, and illumination. Tarot is the perfect way to connect with this celestial event, using the cards to understand how it can help you on your journey!