Itana Rakic
Itana has been reading Tarot for a number of years. They are dedicated to honing their craft and sharing that information with others on Tarot Technique. In addition to Tarot, Itana is an occultist and astrologer, truly a well-rounded spiritualist!

The Knight of Swords 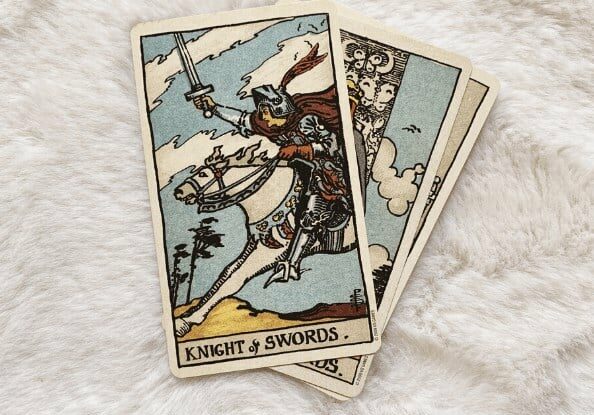 The Knight of Swords is a dreamer, his imagination is overactive, and he likes to inspire others to undertake spiritual quests and evolve their Soul. The quests he undertakes seem ludicrous and fantastical to those of a more timid and passive nature. But, with his swift sword, the Knight dispels the clouds of doubt and darkness in order to lead us to the emanating light from above.

He is a great conductor for astral travel, lucid dreams, and connecting with Akasha records; when his tarot card is placed below a pillow of the magus, he can help one to go where one wishes in his dreams and reach conclusions that remain hidden in the waking state. The Knight of Swords is not for the initiates who lack a brave heart; his methods are swift, decisive and leave no room for second-guessing and doubts.

The Knight of Swords is a young person who is full of action and active energy; what he lacks in wisdom, he compensates with experience. He is the message of East Wind, and he dwells in the upper layers of Earth’s atmosphere where he hangs with sylphs and East angels that govern new projects, exciting (new) beginnings, and verbal promises.

The role of the Knight of Swords is to inspire young people (especially lads) to chivalry, truthfulness, and cavalier behavior. He is the eternal representative of the Air element, and he is connected with natal placements in Gemini, with planet Mercury and Saturn in Libra. The Knight of Swords is fair, chivalrous, and noble. But he is also rash, impatient, and a trickster (all for a good laugh).

Symbolism and Imagery of the Knight of Swords

The Knight of Swords tarot card is depicted (almost) flying on his white steed. There’s a lot of sky-blue present on the card, quite naturally, for the Air element is almost the entire element of this card. The Knight‘s steed is white, as are the clouds that seem shredded in the background; this represents the purity of thought and information that Knight of Swords carries with him.

Besides predominant colors of light blue, white, and silver/grey, we have a strong red color present both on the Knight‘s cape, his helmet, and the ground in the far back of the card. This represents the fiery element of his Air. This red depicts swift and sometimes merciless change that he is the harbinger of.

The speed of the card itself is depicted by the horse’s legs that are not even touching the ground, Knight‘s charging stance, and the bent tress as well as ripped clouds in the background. The Knight of Swords is all about swiftness and speed, and this is the fastest card of the entire Tarot, right after the infamous 8 of Wands.

When the Knight of Swords pops up upright in a reading, it heralds a swift change of something. He is a resounding “yes” to an asked question when he shows upright. He represents someone who is either a serviceman or someone in a management position. He is an efficient assistant, apprentice, student, and designer. But most of all – he represents someone who is extremely smart and who takes the initiative.

He foreshadows an appearance of someone who will turn up in our life very quickly and might as well be gone as quickly as they appeared, but they made the irrevocable change in us and our life. This is a young person or a person who has a youthful spirit full of excitement and adventure.

Knight of Swords upright could indicate that we need to undertake his qualities in order to deal with a problem or a situation in our life. He is the encouragement for the Spirit showing us the way out of the situation we thought unsolvable. Knight of Swords is reminding us of a childhood spirit we had while we still believed that dreams come true and that this life experience is limitless. He is reminding us that we can fly.

When you get the Knight of Swords reversed, he is indicating that someone will lose patience with us. He still retains the positive qualities of bravery, subtlety, wits, and eloquence, but in his reversed state, he is more prone to anger and angry outbursts; the crucial difference is lack of patience and empathy within the person in question when he shows up reversed.

If he is pointing at us, then it’s most likely we’ll be the cause of someone’s tears or hurt ego, for our words will be sharp and sting like a wasp bite. He is warning us not to lose our patience so much so that we wreck the entire relationship with another person over a couple of minutes of high-running emotions.

He is also cautioning us that a sudden outburst of violence and a physical attack might happen, and in that case, we should keep our eyes open and steady our tongue if we find ourselves in an unsavory situation. If we get the chance for a verbal fray, we should hold our tongue and retain the peace, for otherwise, the situation might turn very unsavory very fast for us.

When Knight of Swords appears upright in a love reading, the answer is “yes!” and not only that but a ‘yes’ that will come to pass quite sooner than the reader expected! He represents a young (or a youthful) person who will appear out of nowhere, carried on by the fast eastern winds, and change the life of the reader for good.

This is a romantic, chivalrous and cavalier person who will say all the right things and suggest all the right activities for the one who’s inquiring about his/her love life. It’s a good omen for a love tarot reading when he shows upright for it shows a positive change and swift happenings in one’s love life.

This card can signify that the lover who appears out of nowhere will have many/strong natal placements in the sign of Gemini, or it can be someone whose Mercury is in Air signs along with their Venus. This is a depiction of a partner who is polyamorous and who can’t sit in one place. Excitement and thrill follow this person around wherever they go.

When the Knight of Swords appears reversed, he is indicating that the answer is a swift ‘no.’ Especially if the question asked was something along these ‘is s/he faithful?’, or ‘will s/he ask me the big question?’ lines. He is the omen of ghosting, a love interest/lover disappearing without a word.

He also foretells verbal conflict and heated arguments, especially if the current Venus or Mercury transit is through the sign of Scorpio. This card represents the culmination of inner doubts and fears tied to betrayal.

Reversed Knight of Swords in a love reading also indicates that someone is being played in a relationship. If he represents you, he is warning you that your untruthfulness will be exposed, and your relationship will end in a swift manner.

When this gent shows upright in a career meaning, he is foretelling positive news/information concerning your career question. If you were aiming and working for a raise – it shall be granted. If you were working your ass off and being your best self at work – a word of praise from a high place in the company’s food chain would reach your ears.

Conversely, Knight of Swords can indicate a short work journey or a fun evening with your coworkers as a part of a team-building activity. Knight of Swords also signifies the successful completion of a very important task, so there’s definitely going to be a cause for celebration.

It can be an omen of a new addition to your work team, too. This card can represent a young (or younger than you) person who will bring that necessary zest to your collective and add new ideas and outlooks on the projects that feel a bit stale. This card signifies someone who will inspire you to be the braver version of yourself. Conversely, this card can point to you and you being the fresh, new addition to a workplace that needs shaking and waking up.

When this Knight appears reversed, it signifies less-than-positive changes at work or a setback concerning your career advances. If you had plans and worked on them – count on them being delayed or falling through. Information that is less than favorable will reach your ears, and you won’t be pleased.

With the swords suit, there’s always gossip to be included when the cards show up reversed, so be mindful of what you share about yourself and with whom.

Conversely, if the Knight of Swords card represents you – it’s a cation to stay clear of gossiping about others for a verbal fight can turn into an actual fight. This card is warning you that spreading misinformation will not fall on deaf ears. Instead, it will cause a big ruckus and even severe consequences for workers involved.

Good news! Quick cash is on your way, and you’ll be paid for a service you did. An unexpected client will show up and bring with him a hefty sum of money for you. This is good news, and it means that good word about your services will spread.

It also means that you won’t have to pay for marketing and advertisement services, your work will be your testament, and it will bring an influx of quick payments and cash, alongside good connections and verbal exchanges.

Unlike the upright meaning, reversed meaning is an opposite one. It means that a certain sum of money will leave your pocket and for something totally unpredicted and sudden. This reversed meaning aligns perfectly with the symbolism of Retrograde Mercury and its transit through Air signs.

It can also signify a possible loss of a client due to some evil tongues that wish you unwell and are jealous of your recent success. As this card is a swift one and its effects pass quickly, it’s not permanent ‘damage,’ nor should you worry too much about it. But, it is a warning card that you have a hidden enemy that works against you.

The Knight of Swords is the fastest card in the suit of Swords; this article was meant to be a helper on your Tarot and magical journey, but if you still have some questions, do check the FAQs below.

Question: Is the Knight of Swords a ‘Yes’ or ‘No’ Card?

Answers: if it’s upright, it’s swift and decisive “yes!” If it’s reversed, it’s a ‘no,’ but not a lasting one.

Question: What Does the Knight of Swords Signify in a Future Position?

Answer: it signifies a coming of a person who is a harbinger of change and new opportunities. If it’s reversed, it signifies quarrels and delays in plans, but nothing permanent.

Question: What If the Knight of Swords is in a Past Position?

Answer: if it’s upright is signifies a meeting with a person who had a positive influence on you and an opportunity used right. If it’s reversed, it signifies a past time of troubles that you successfully overcame.